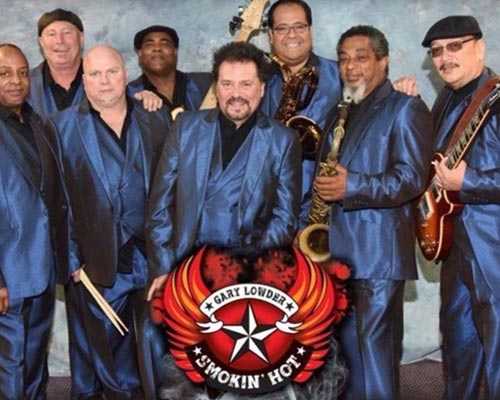 Gary Lowder & SMOKIN’ HOT ….
are known as a Soul, R&B party band based out of North Myrtle Beach , SC. Their musical repertoire covers decades of hits from your favorite artists and genres of music including soul, rhythm & blues, funk, reggae, jazz standards, country, 50, 60’s and Carolina Beach Music. In addition of performing some the most current hits that are topping the charts today, the group has had many successful chart topping hits on local radio and internet stations across North and South Carolina, Virginia, Georgia, and Florida. Gary Lowder & SMOKIN’ HOT….. are comprised of multi-talented musicians who have come together to produce incredible performances each and every time they take the stage.

In 2014, the group was nominated for “GROUP OF THE YEAR”. In 2015 Gary Lowder & Smokin Hot were nominated for thirteen Carolina Beach Music Awards, with J.K. Loftin, group guitarist, being honored with “ENGINEER OF THE YEAR”. In 2016 Gary Lowder and Smokin’ Hot were nominated for 6 CBMA Awards, including Male Vocalist (G. Lowder), Group Album (Playin’ With Fire 2) Entertainer (G. Lowder), Engineer & Producer (J.K.Loftin-Playin’ With Fire 2), Collaboration or Duo (G. Lowder & Marsha Morgan,”Too Many Tears”.

The testimonials keep coming, every time we finish a live performance…
The members of SMOKIN’ HOT live up to the name! Our fans agree…

Thanks to God for all the blessings we’ve been given… The soul speaks through music!